Hill Station restaurant in the historic Hillcrest neighborhood of Little Rock, Arkansas was developed in the newly-renovated Helmich family service station—a fixture of the area since the business opened in 1957. The restaurant ties together direct references to automobiles and a shop aesthetic while also maintaining a level of classic comfort dining that is influenced by and rooted in the deep history of the neighborhood.

The following work is a collection of design assets, lettering and typesetting developed and distressed over the course of one weekend reading through Little Rock’s rich history of Hillcrest and The Heights. I contributed a large linen canvas ad treatment that spans the width of a garage door, vintage-style ads and found photos presented as collage for the restrooms and miscellaneous indoor and outdoor signage.

This project officially started three years ago, but I only worked on it for three days.

In early 2017 Kyle Pounders, my friend of numerous business dealings, gave me a call with news that he was contacted by Doug Martin, a former Senior Managing Director at Stephens who had recently acquired the old Helmich family service station in the middle of Hillcrest. Kyle was being considered as a candidate for upgrading his food truck, Excaliburger, to a dine-in restaurant in Martin’s new space following renovation.

Kyle realized quickly that he wasn’t yet interested in that level of responsibility and more importantly that the space didn’t feel appropriate for the aesthetic of Excaliburger.

This wasn’t the first, or even tenth time he was presented with an opportunity of this caliber, but it was the first that he wanted to make an effort for presenting an alternative plan. He got me involved under the idea of pitching that we call the space “Helmich’s” as a nod to the building’s history. The vision was pretty simple. I would design varying brand marks and assets that he would relay in a followup meeting. We collectively curated garage-themed inspiration and I made a round of ten different logo options for consideration.

A month later we were introduced to Daniel Bryant, a little rock entrepreneur who owns numerous restaurants across the south. I met Daniel in his driveway at six in the morning and the three of us drove five hours southwest to Dallas, Texas for taste-testing and research. He treated us to food at five unique stops, making a deal at our final stop that the loser of washer toss would pick up the tab. Just when I thought it was time get my credit card and settle up, I sunk two on my final throw to place the burden of the bill back on him. I always felt a little bad about that since he was doing all of the heavy lifting in expenses for the day, but I guess a deal’s a deal.

Daniel would end up providing Kyle and I with a few different lessons on work ethic, good business and responsibility as we made the trek back up I-30. We still reference a few of those bits today. That would be the first and last time I saw Daniel for three years. The juvenescent and cautiously naïve ideas Kyle and I had were not suited for the future development of the old Helmich service station.

I received a call looking for someone to think-though materials and strategy for mounting a large display of a 1920’s era ad promoting lots in Hillcrest as low as $400 ($11,000 by todays rates and 10% of the current appraisal values). It was a neat piece of history, referring to the area as “healthful,” and “handsome,” while also referencing the “congenial surroundings.”

I reformatted the ad to fit the wide space, relying on the Sentinel type family from Hoefler & Co.—one of my favorite slab serif typefaces currently in existence. I had the ad printed on linen cotton canvas with test swatches showing how it would look as pure vector art, and also rasterized and distressed using a few of the Photoshop brushes from True Grit Texture Supply. 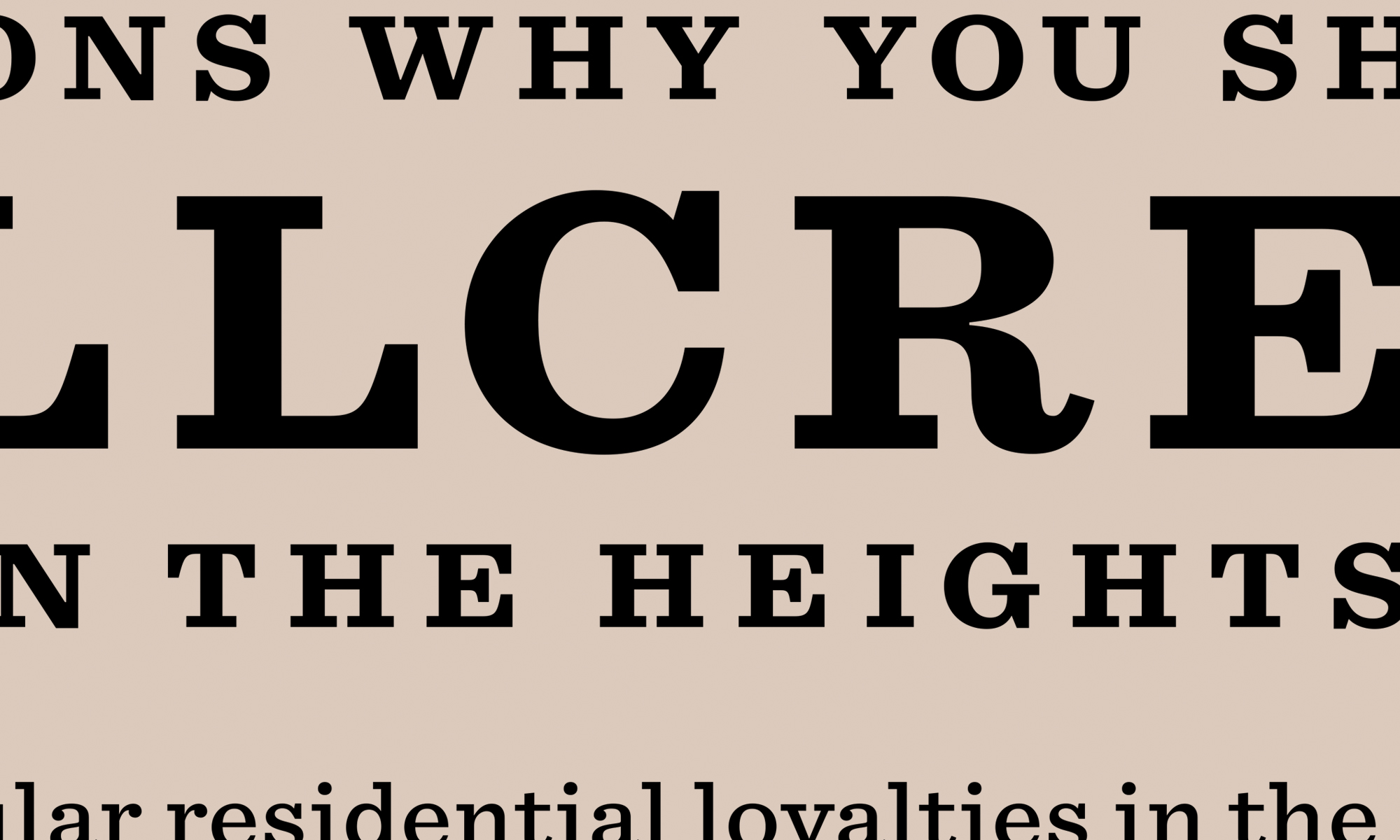 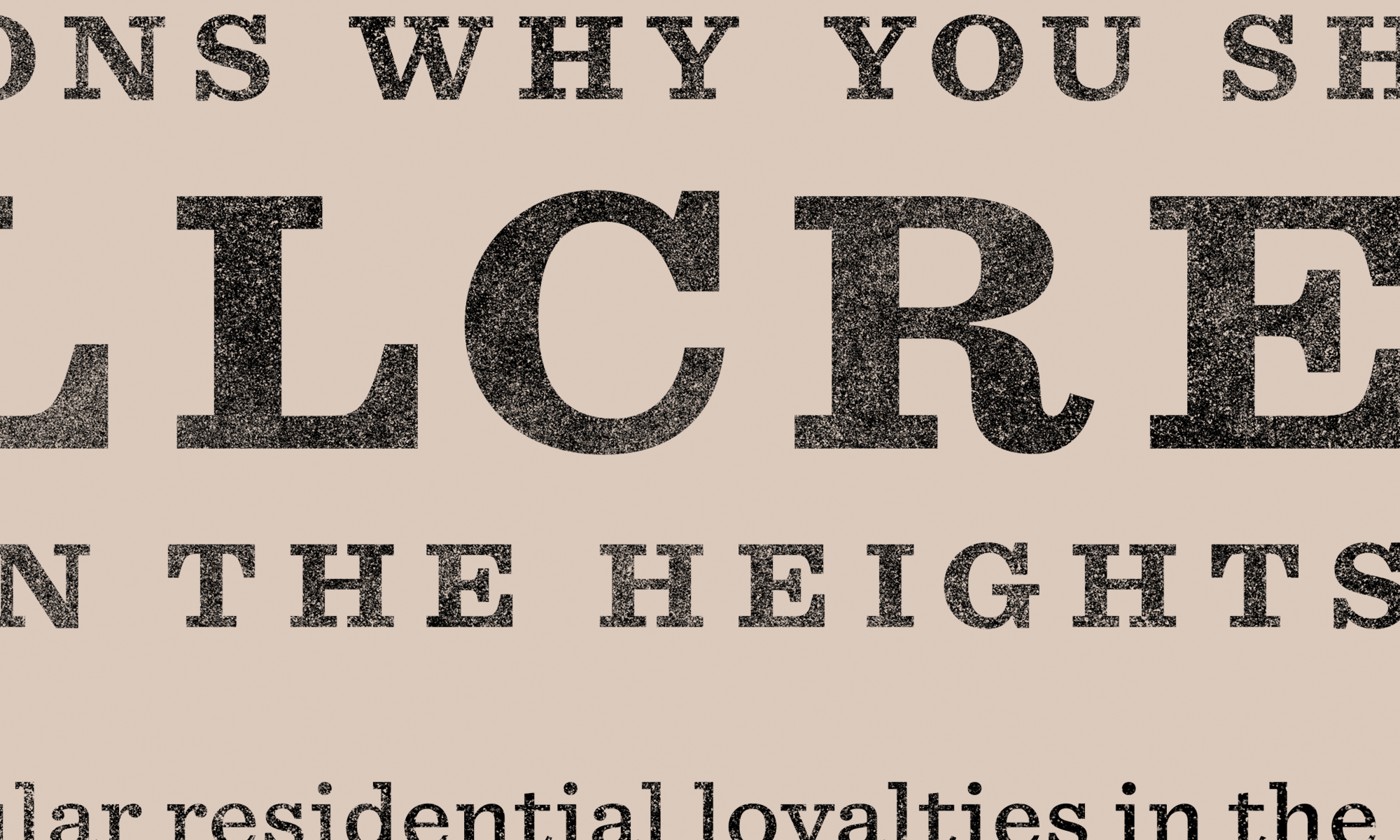 A sample of the linen banner, typeset in varying weights of Sentinel from Hoefler and Co. Compare the clean version and the True Grit Texture Supply version by sliding the cursor. 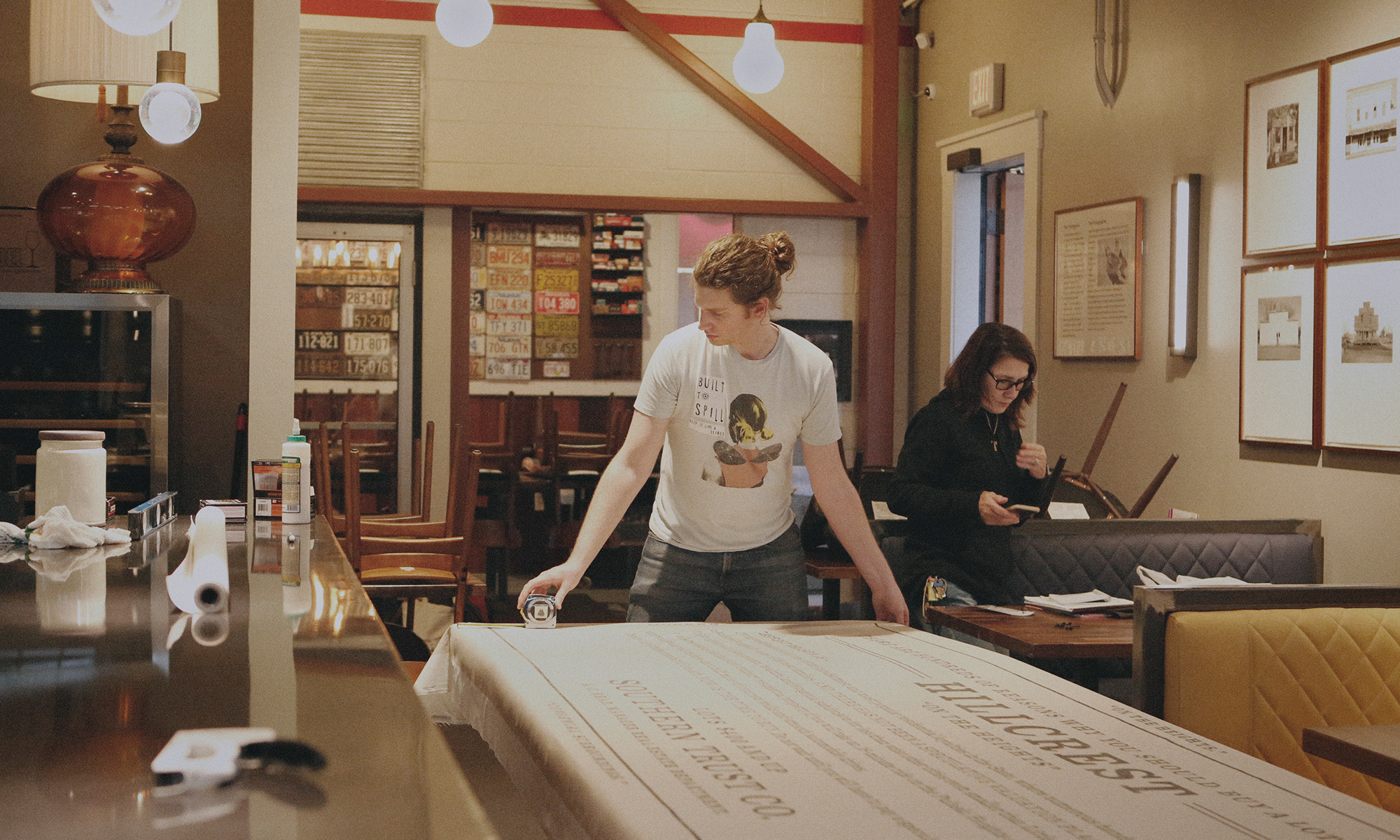 Carefully stretching the fabric over a wooden backing prior to mounting it on the wall. Beer on the house :). 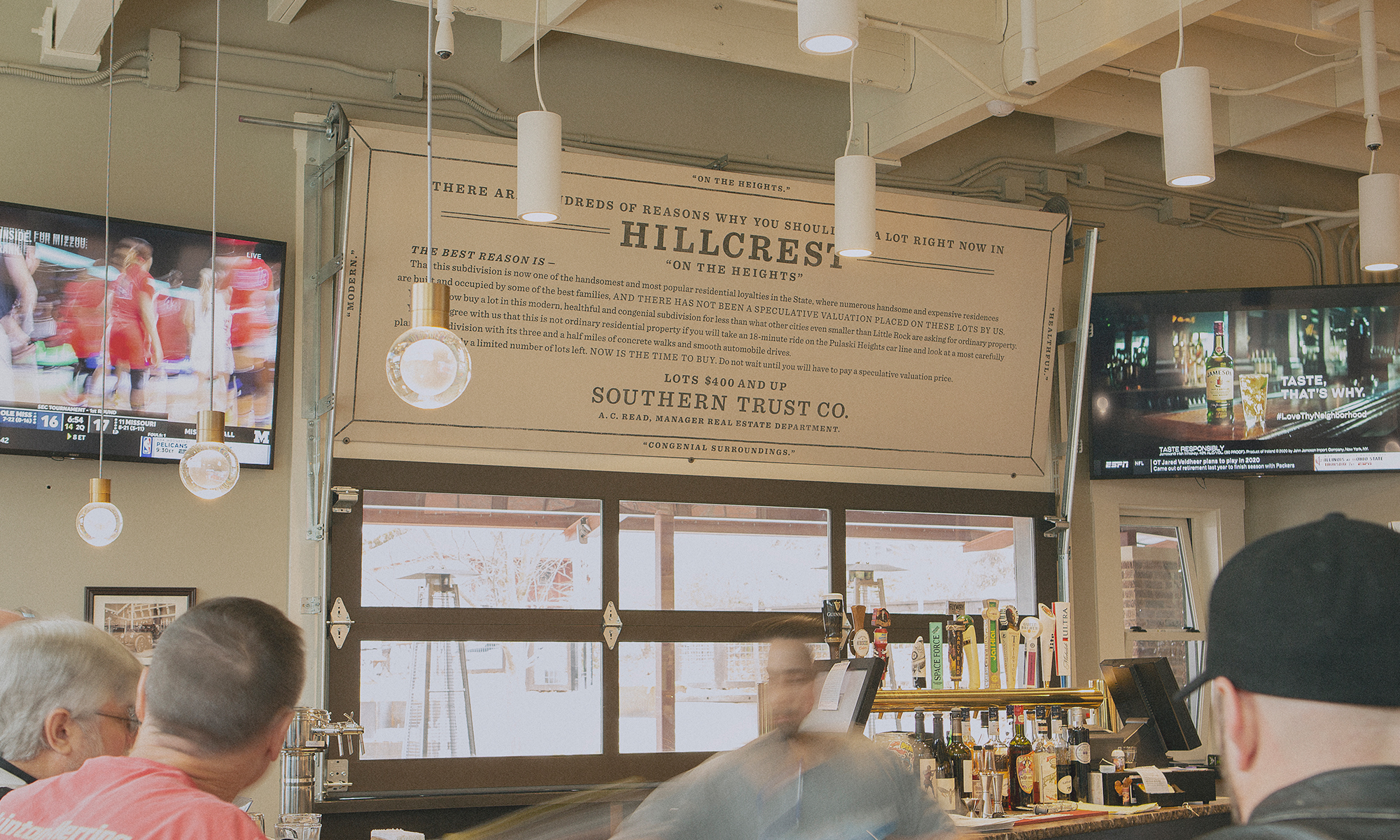 The historic Hillcrest advertisement, readapted and printed on linen cotton canvas, displayed over the bar.

This project officially started three years ago, but I only worked on it for three days.

I’ve wanted to design for restaurants since my career began. In fact, I started my freshman year of college with intentions of pursuing interior design before becoming familiar with the processes employed in my entry level 2-D design class. Since the banner came together quickly, I was given an opportunity to further contribute to the restaurant while waiting for production time from my vendor.

I received reading material on the history of Little Rock, Hillcrest and Pulaski Heights. My entire Friday evening was spent immersed in the information. Inspiration struck, and I decided to commit the remainder of my weekend to billing partial pro-bono work in excess of the budgeted allotment out of genuine interest and enjoyment. 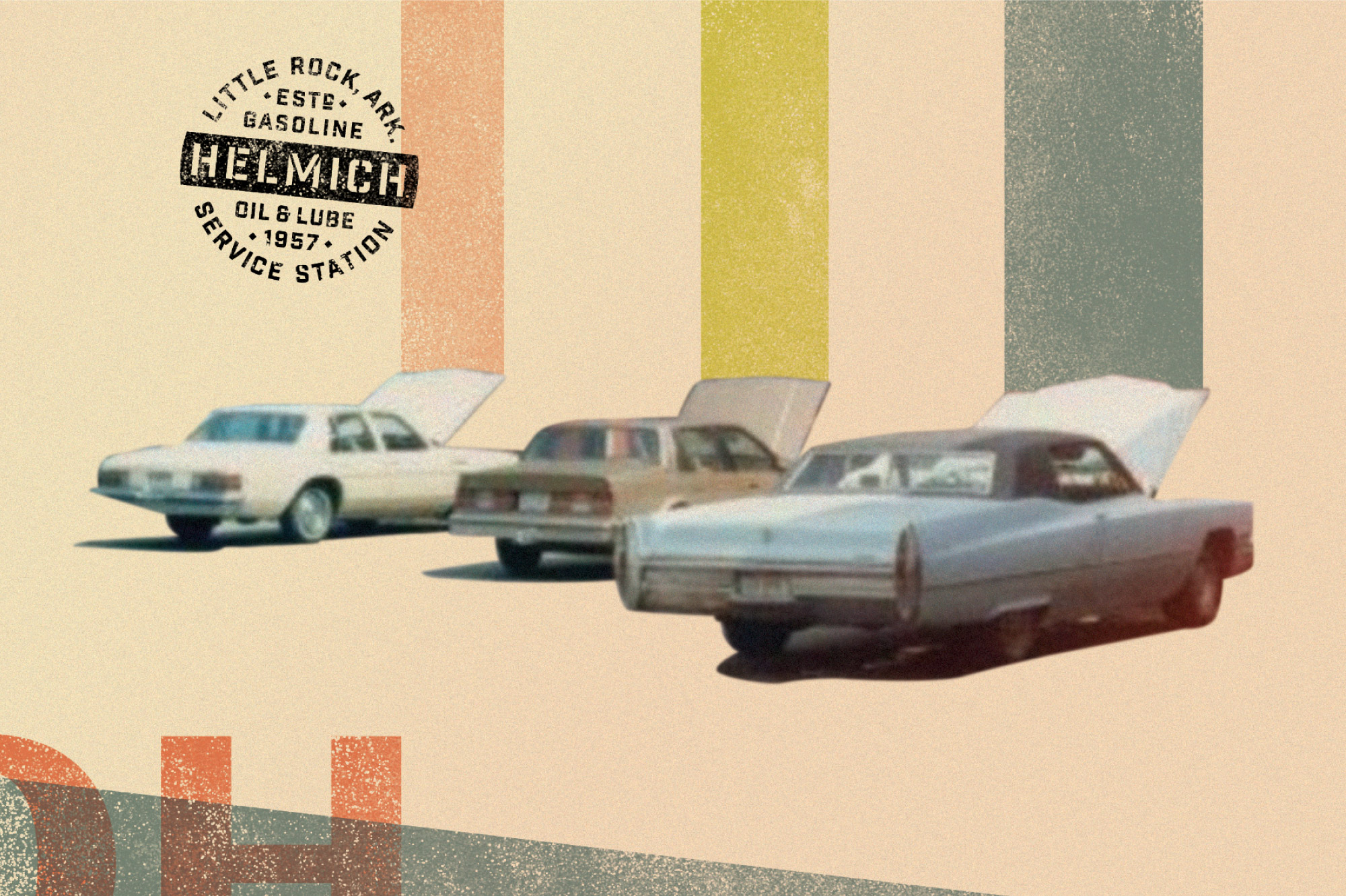 001: This piece ended up being my favorite from the full collection of 26 compositions. I was also excited to see that the popular Instagram account, @logoinspirations picked up the small badge design that I made to show the history of the Helmich service station. Type used: Industry. 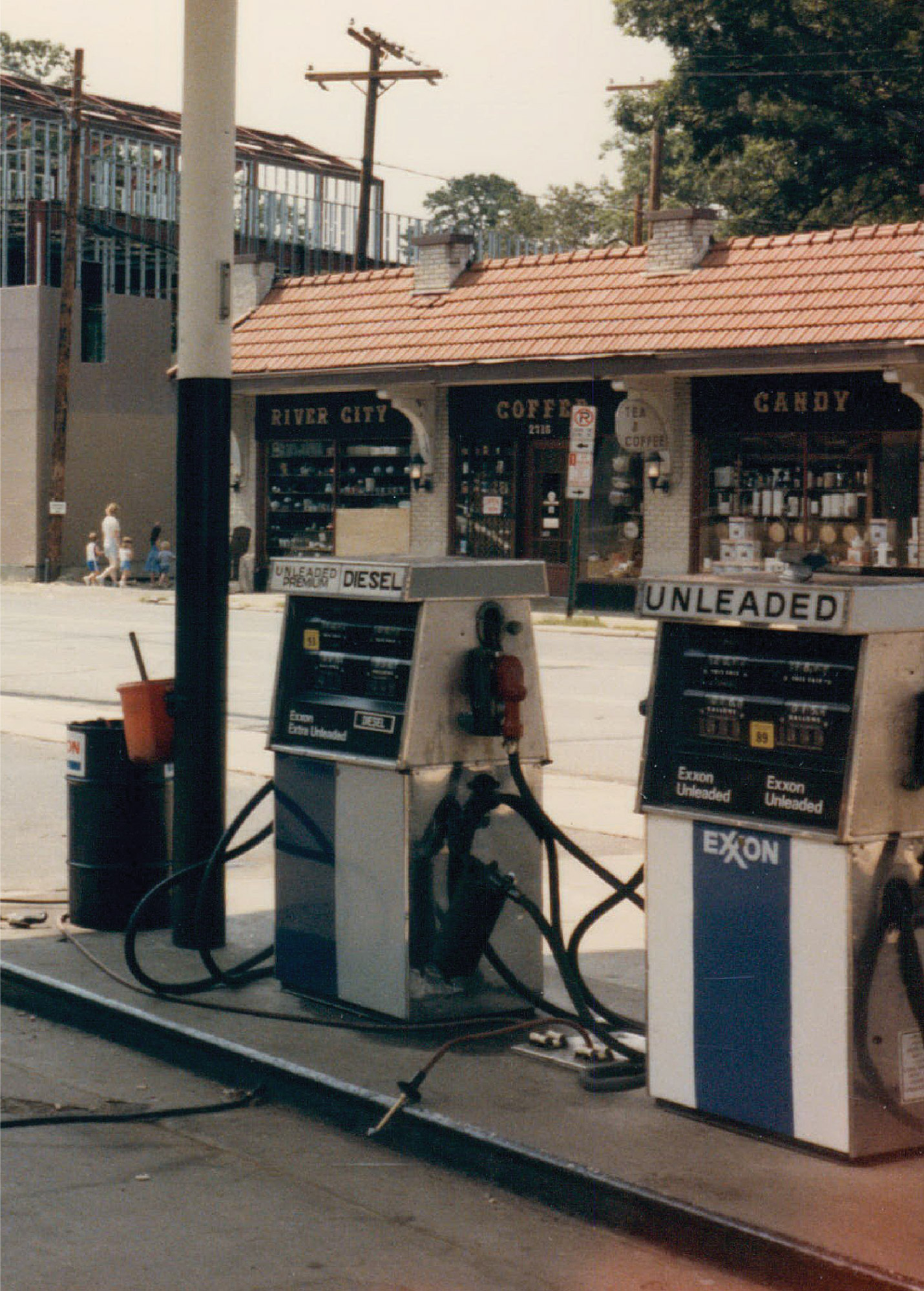 002: I'm a big fan of observational photography. By cropping this image, which is about 25% of the original, color and leading lines really helped it work with the other pieces.

003: I added color to some historic Hillcrest images (top) just to help them relate to all of the compositions. The simple Helmich logo was made using the open-source Interstate fonts. 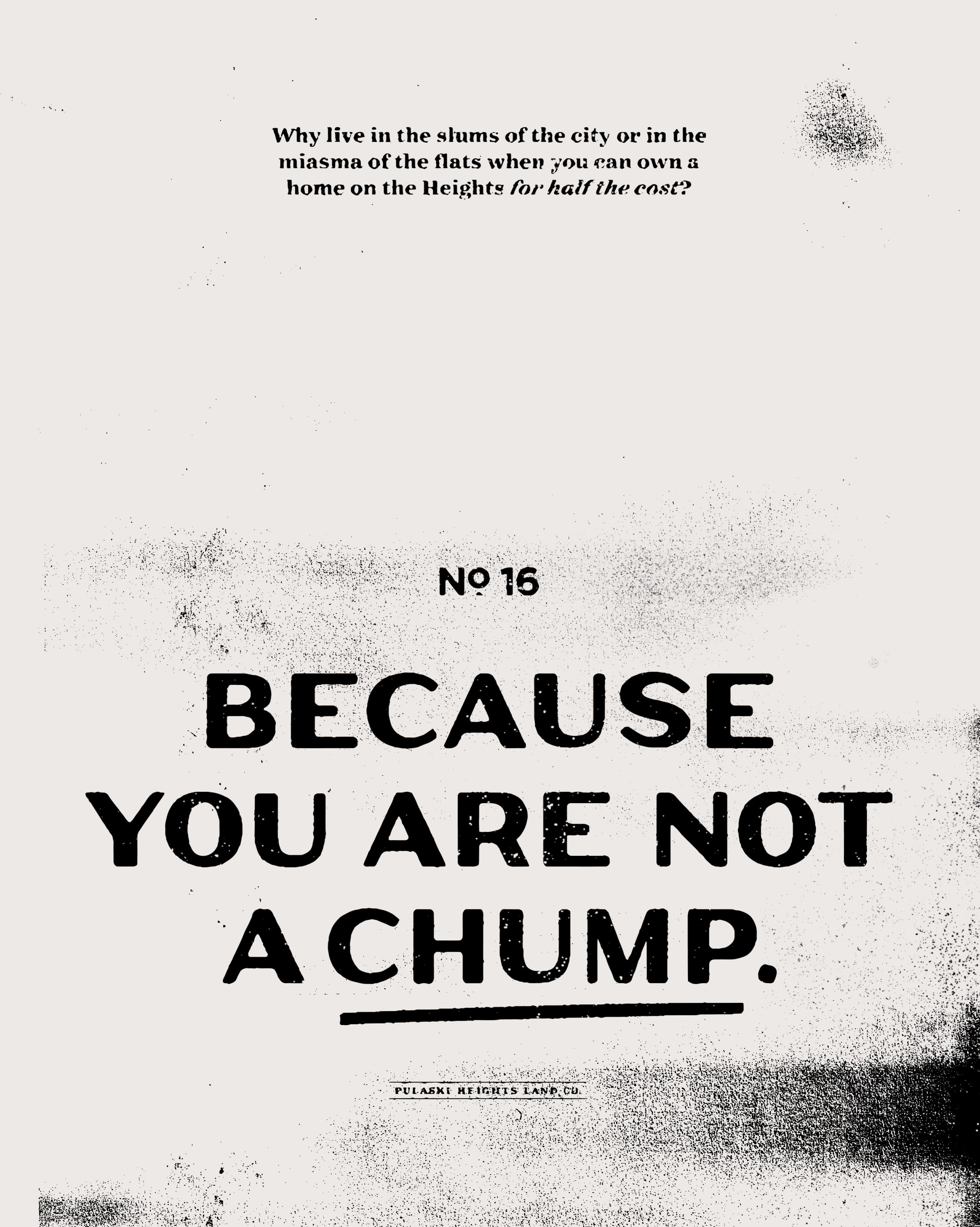 004: This is the very first piece I made. When reading through history I saw a reference to an old Pulaski Heights Land Co. pamphlet called "Beautiful Pulaski Heights" which made strong appeals to readers, with reason number sixteen being, “Because you are not a chump.” I decided to typeset the manual as though it were an ad. A modified, more contemporary toned version of the text at the top made the final cut, but I wanted to show the original here. Type used: Sentinel, Gotham, and Handle Sans. 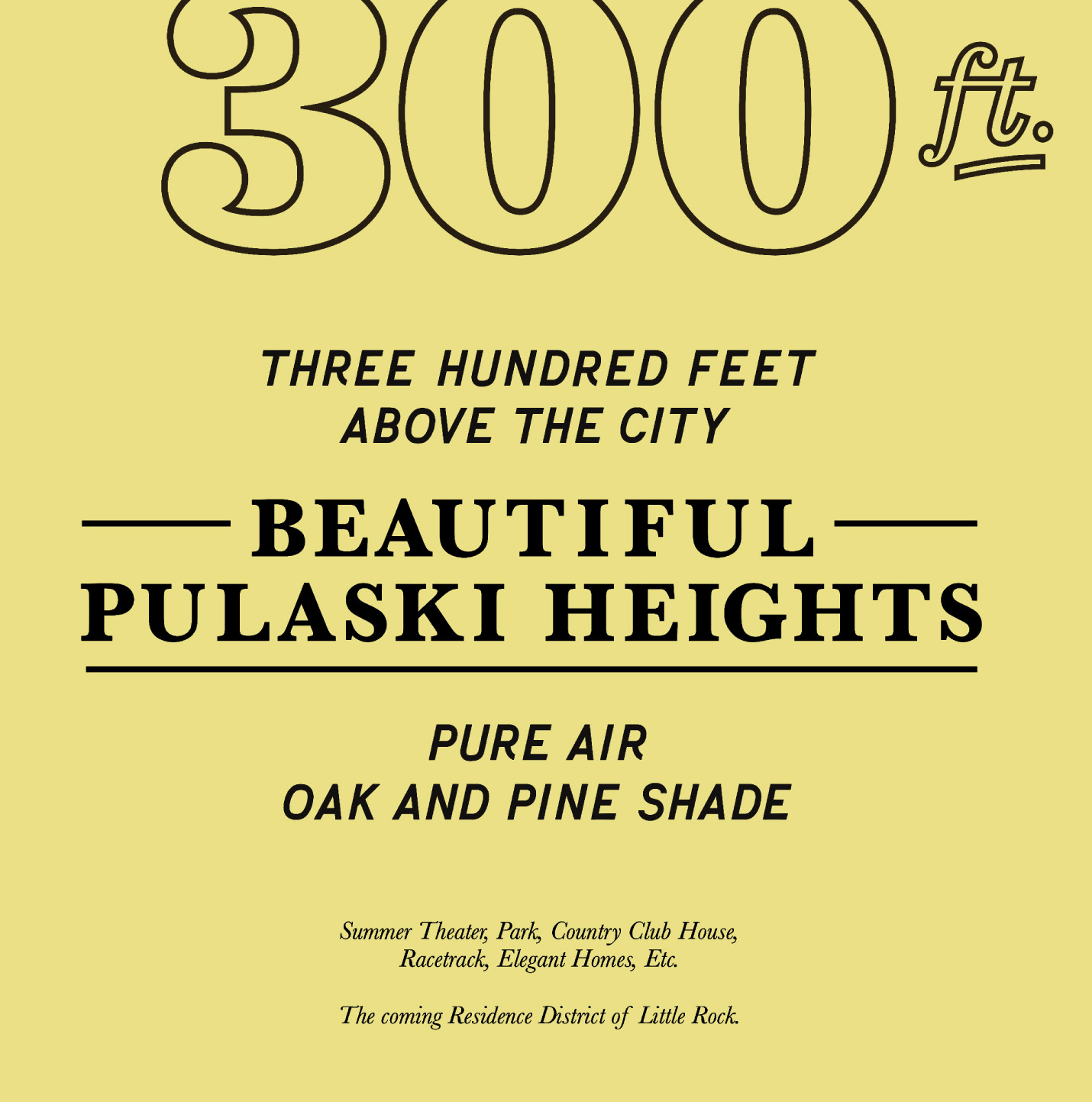 005: Another ad built from text about Pulaski Heights. Type: Sentinel, Baskerville, and a new uppercase family I've been working on for another brand of mine, The Part-Time Press. 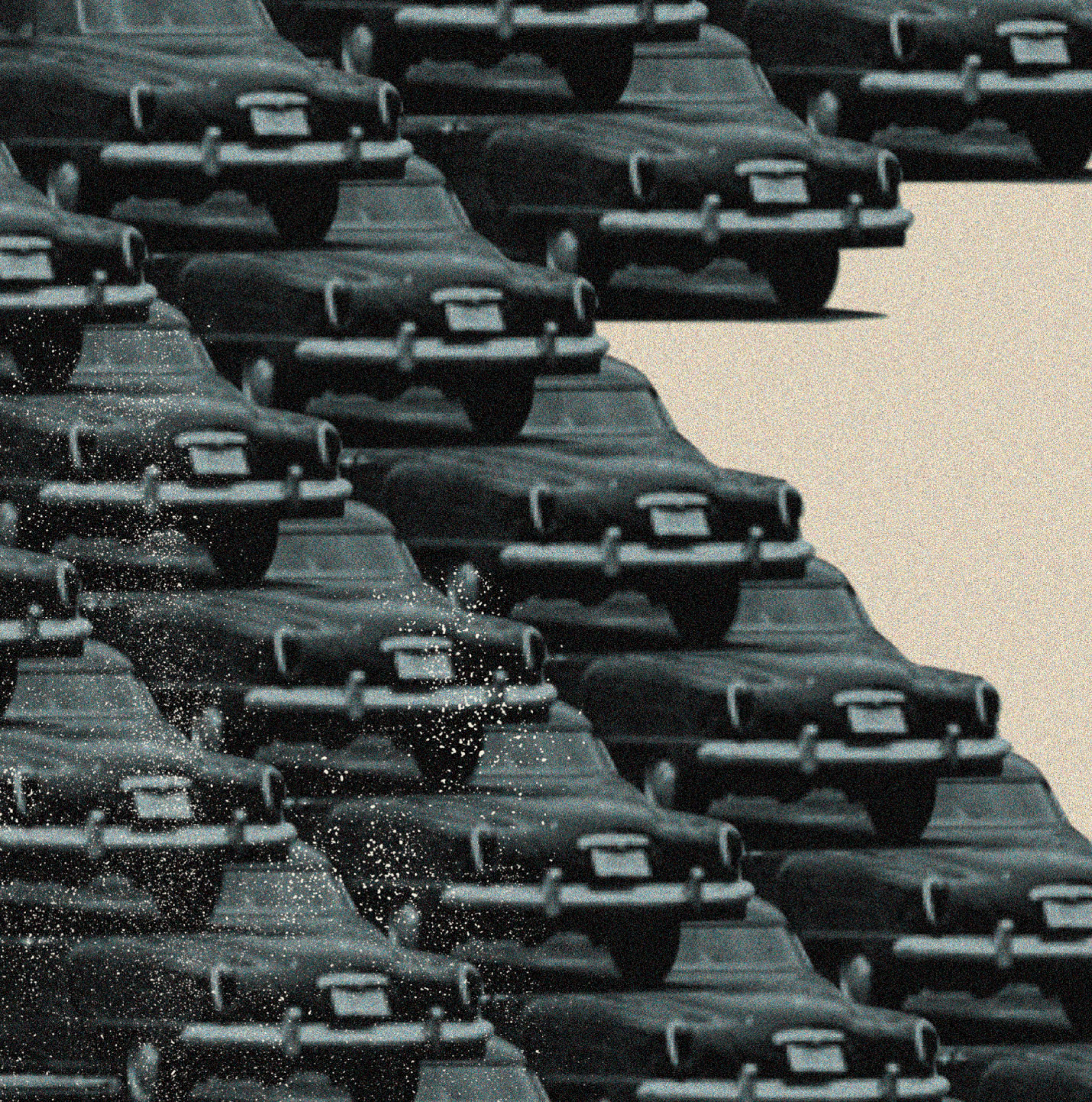 006: This was a simple composition that I ended up liking. Re-contextualized with an alternative color palette and some distortion, I could make the case that it has a psychedelic aesthetic. 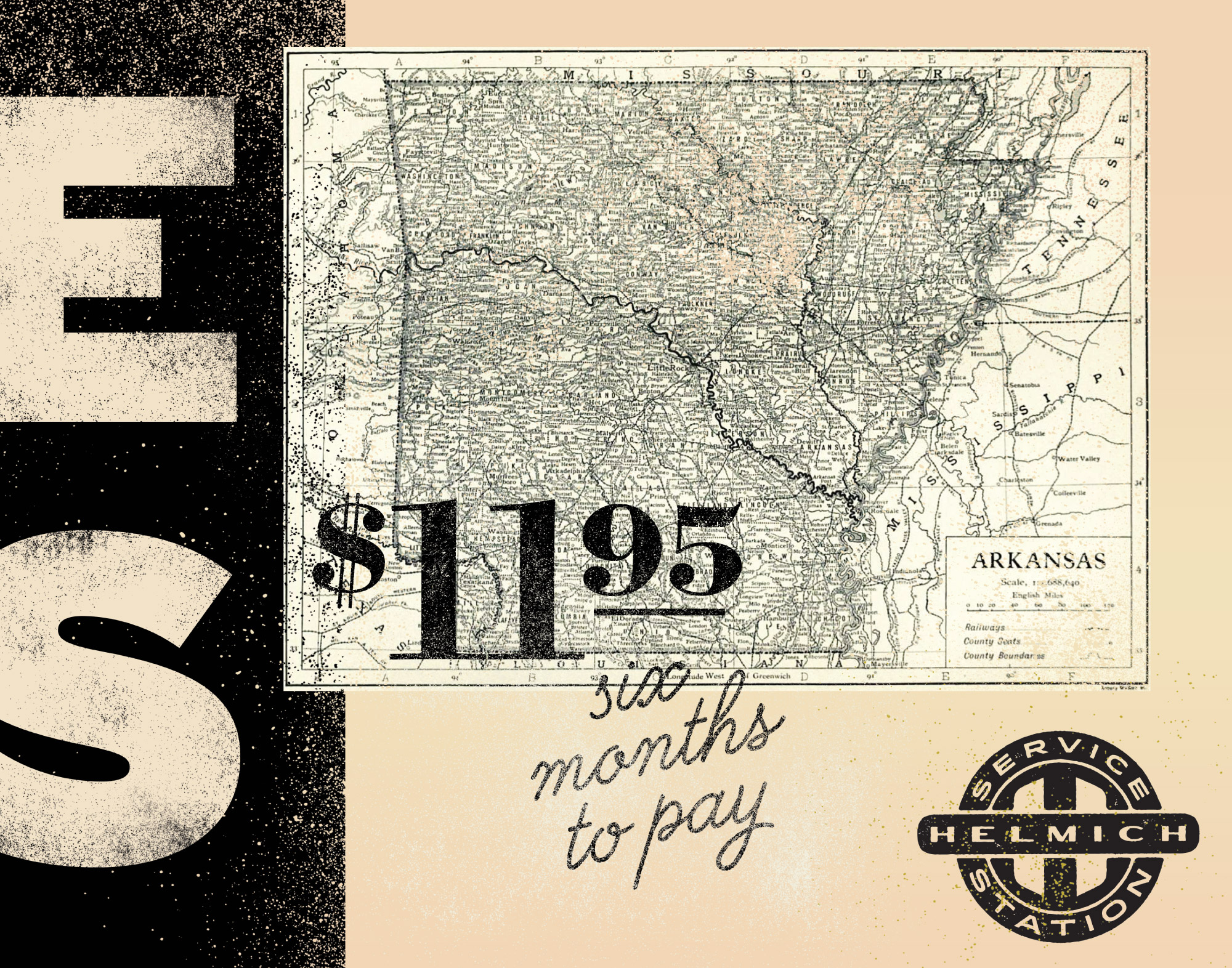 007: Given more time, I would have enjoyed making a map of Hillcrest to use in some of these compositions. I had to settle for an old map of Arkansas. Type used: Gotham, Surveyor, Idlewild and Melany Lane. 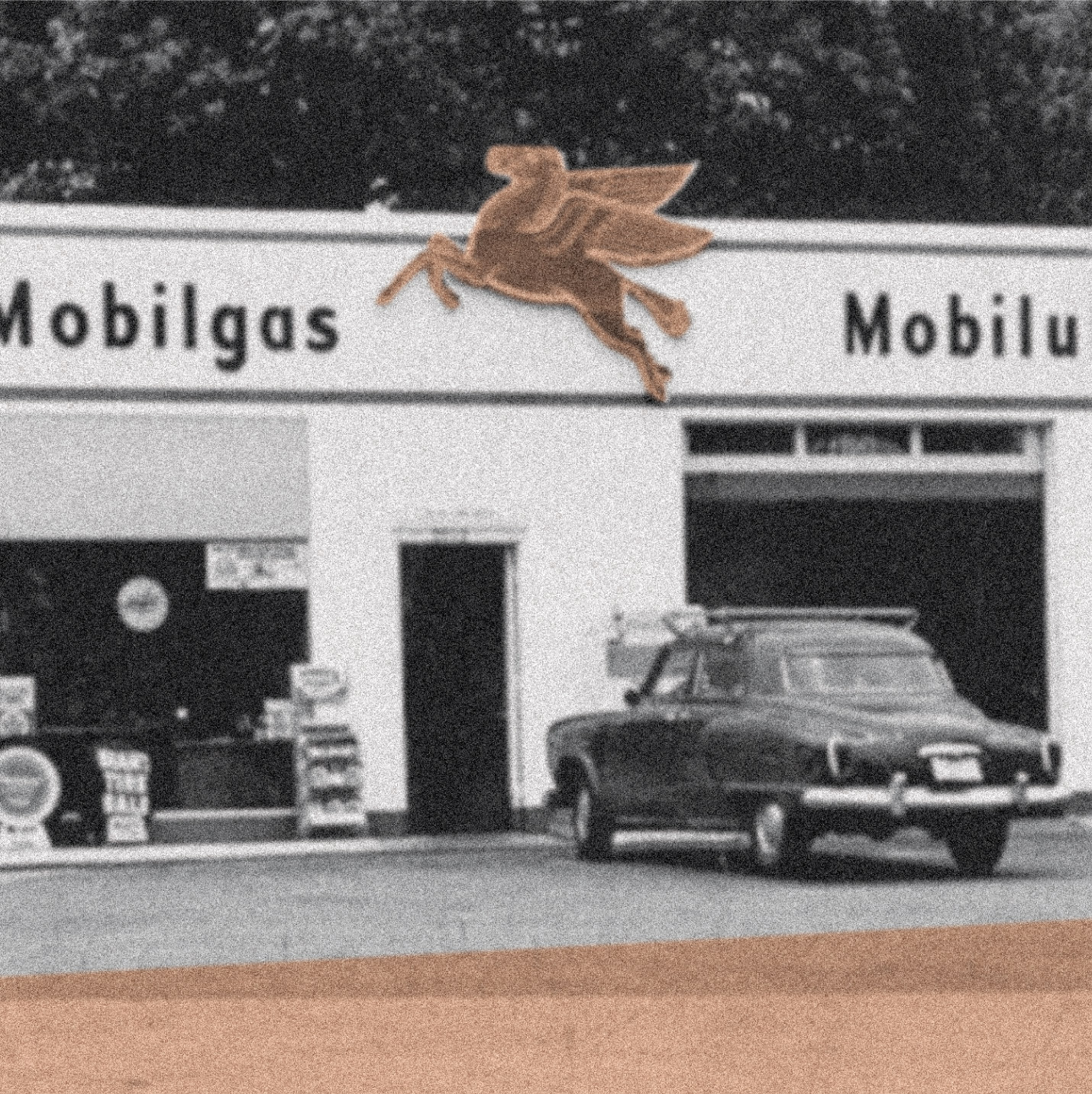 008: I used color overlays to tie this one into the full family. The car pictured is the same one shown in "006" above. 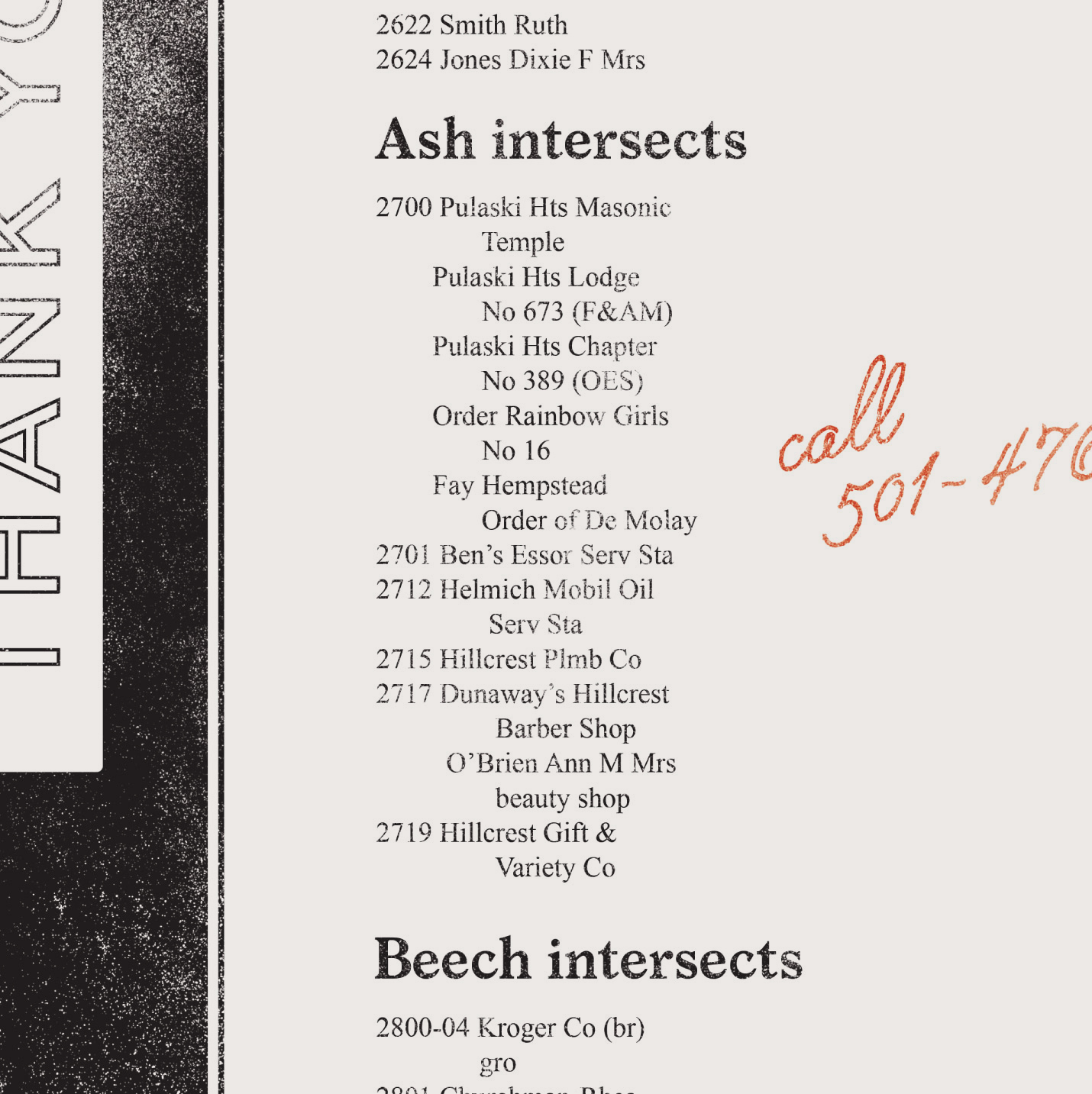 009: This composition is one of my favorites, despite it's simplicity. I love using Larish Neue from Radim Peško. Additional type used: Sweet Sans, Melany Lane and Times. 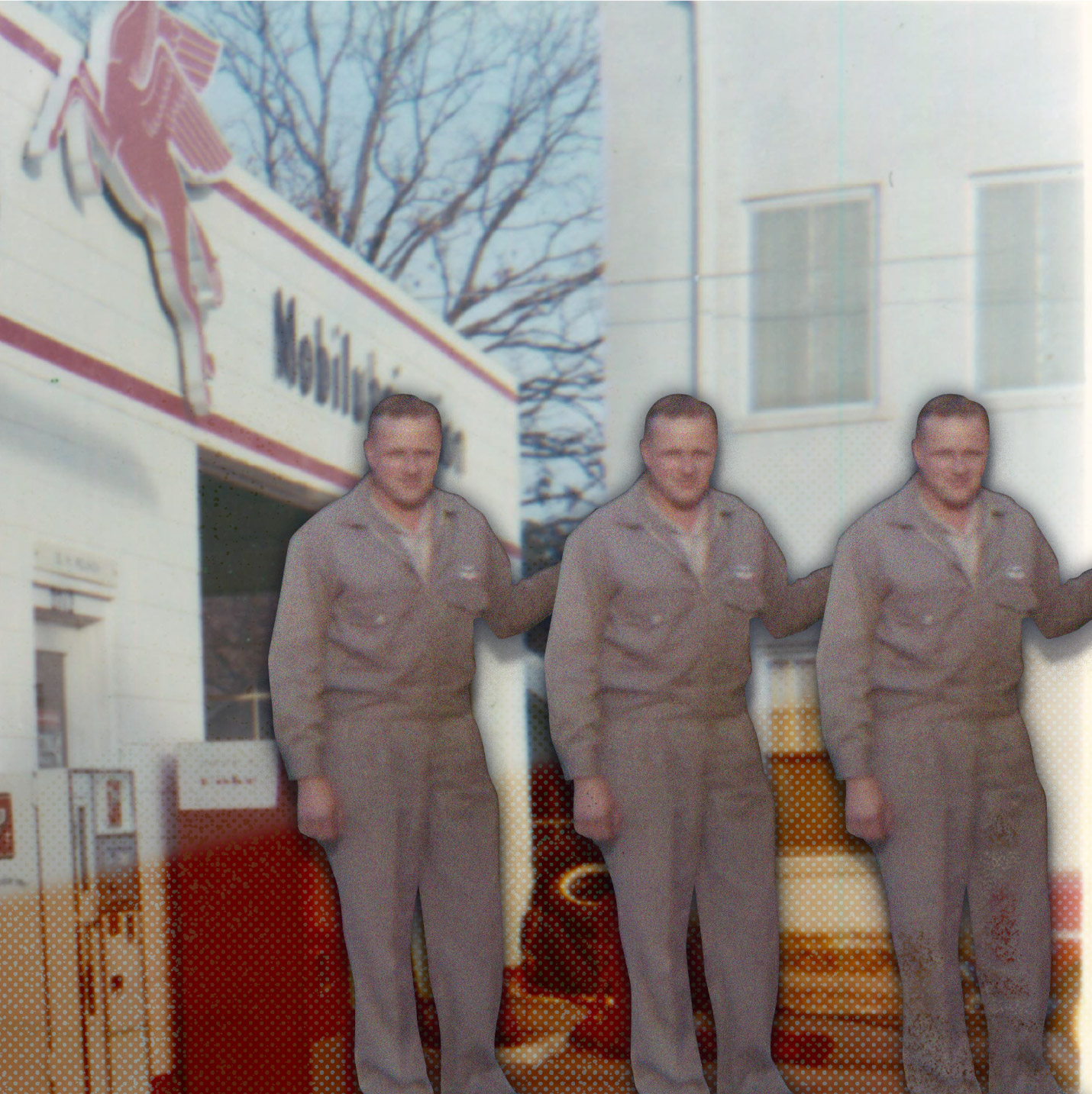 010: This was made from an old photo of one of the Helmich's who was standing by shop signage. 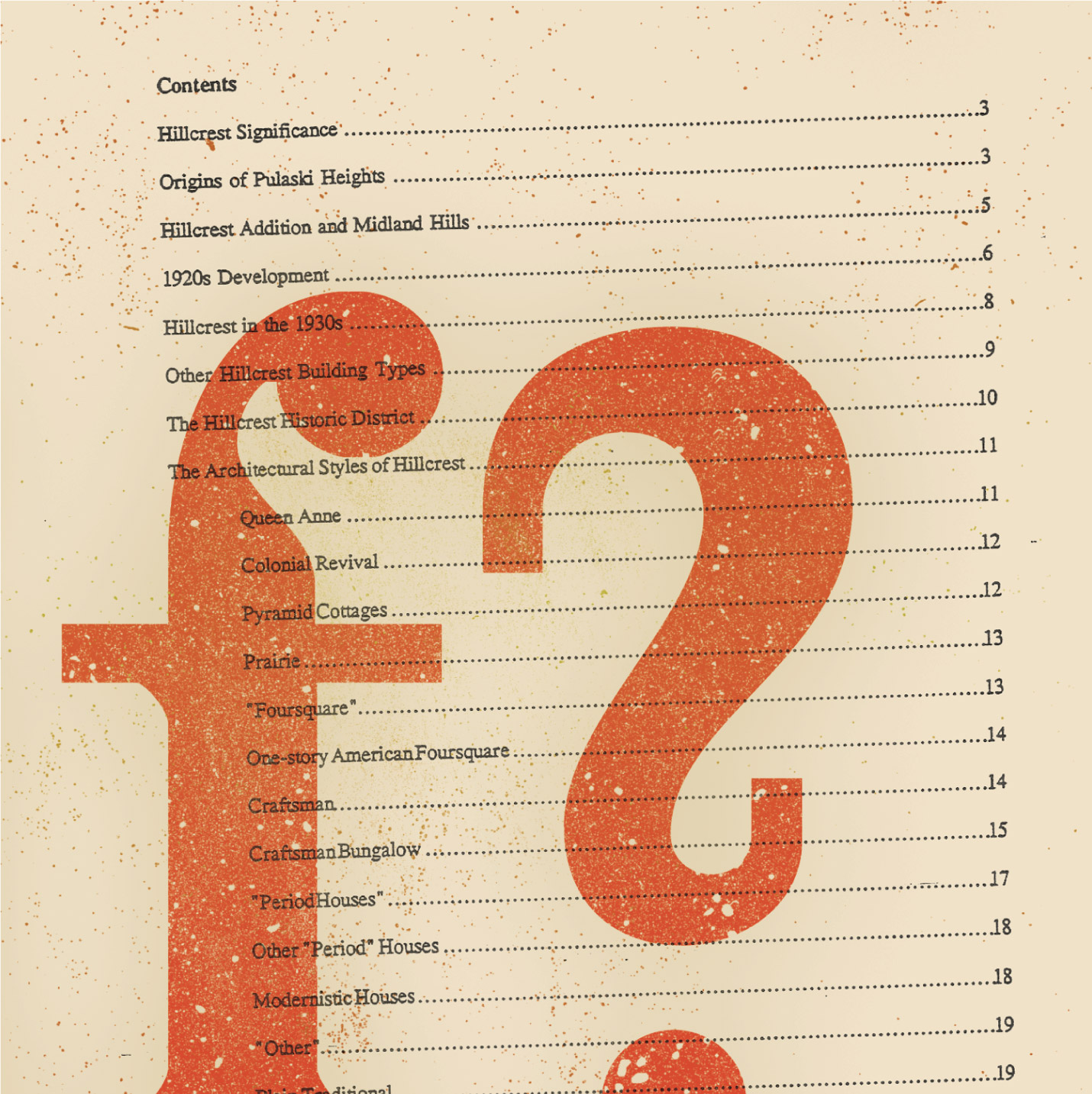 011: On this one, I simply wanted to show a couple of my favorite glyphs from Larish Neue. 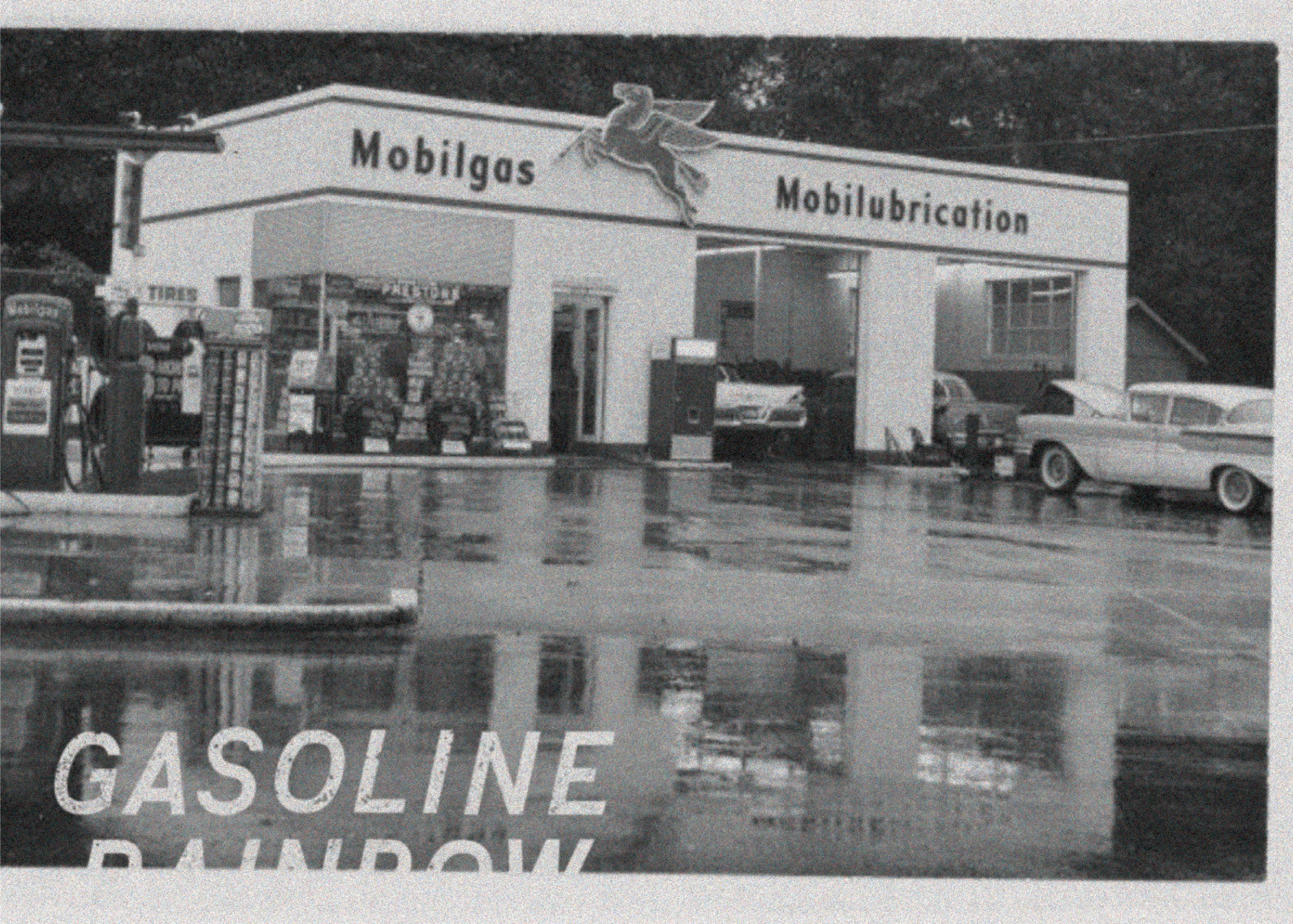 012: I was listening to Built To Spill's first album, Ultimate Alternative Wavers and the lyrics of Nowhere Nothin' Fuckup—"In America, every puddle, gasoline rainbow," synchronized with my artboard when this photo was in the viewport. Type used: the same uppercase family I've been working on from "005" above.

An extra note on this composition: The manager of Hill Station noticed I was wearing a Built To Spill shirt while installing the banner and mentioned that she never sees that in Arkansas, followed by news that her husband lived in Boise, and is friends with Doug Martsch. Small world, and incredibly cool to me since I consider him to be one of my favorite artists.

I look back over the weekend of work I was able to produce and I like that it will all reside in the restrooms. That feels like an appropriate entry point to restaurant design at my age—relevant to the lessons Kyle and I learned three years prior on the Dallas trip.

Kyle and I sat at the same table on opening night, reflecting on the three year past and enjoying burgers that he didn’t prepare (a rarity for me). As always, I’m thankful for the opportunity to get paid doing what I love, but this project was a little more special, given the history of it all.

Be sure to stop by and have dinner or drinks at Hill Station while visiting Little Rock. 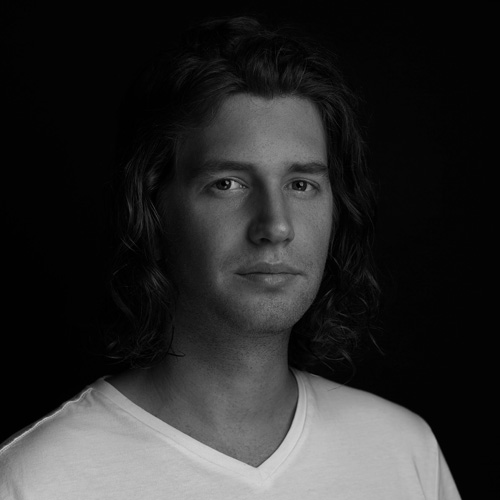